Can Only HBO Offer & Pull Off An Epic? 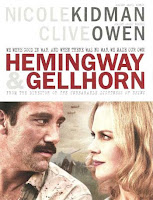 We saw Hemingway & Gellhorn, starring Clive Owen and Nicole Kidman, at Paul’s because he’s getting HBO even if only temporarily.  It’s the type of romantic epic set against tempestuous times that used to be Oscar catnip (think The Year of Living Dangerously, Reds, Doctor Zhivago, Lawrence of Arabia, Casablanca, Gone With The Wind, etc.), but now isn’t released because it’s not tightly focused on a specific character or social issue (almost any indie movie) or doesn’t involve superheroes or book series’ characters (almost any commercial movie).  Paul was disappointed that it wasn’t released in cinemas, but I
pointed out that it was too adult and almost too big, especially politically and historically, to have a chance at the box office.  Thank you, HBO executives, for getting it out there at all.
Amazingly, it was made for $14 million with major stars giving thoroughly lived-in yet glamorous performances.  Ernest Hemingway and Martha Gellhorn met in Key West when he was still married to his second wife, Pauline, and they covered the Spanish Civil War as well as a number of other major world conflicts in the ‘40s.  They were married for five years, but together for about a decade, before she basically couldn’t take him or being ‘Mrs. Hemingway’ any longer and demanded a divorce.
Nicole Kidman is tough, funny, determined, and sexy in this part.  She recalls actresses like Barbara Stanwyck and Susan Hayward in their prime and has an electric chemistry with Clive Owen.  It feels right that he’d drop a wife and family for her and would consider staying with her even after she demands a divorce while his girlfriend, played by Parker Posey, lounges on his hospital bed.  Hemingway’s ambivalent admiration and envy for Gellhorn is palpable.  Their make up and costuming is pretty extraordinary – his jawline matches Hemingway’s in that period and her older age look does not seem put on or rubbery.  Her final exit in her eighties shows a proud woman whose back is giving out.  Both of them really work vocally.  Kidman deepens her voice as the years progress and Owen nails Hemingway’s Midwestern accent.  They both also look great and that’s no small compliment.  She wears clothes as spectacularly as Katharine Hepburn or Sophia Loren and he’s beefed up and the weight suits him.  His Hemingway is brilliant, nutty and, as my Mother would say, “a macho sexist schmuck.”
Jerry Stahl and Barbara Turner wrote a very lucid script that has to accommodate a lot of information about the political upheavals going on in Europe and Asia in the 1936 – 1945 period and the U.S. reaction.  It’s difficult to delineate the differences between Soviet Communism, the American Left wing, and generally idealistic Liberalism that were in full force at that time, but they pull it off without Hemingway, Gellhorn, or David Strathairn as John Dos Passos, or Tony Shalhoub as Mikhail Koltsov seeming like mouthpieces.   The only negative issues I have are structural.  The Spanish Civil War sequence is thrilling, sexy, and very disturbing – only people on the edge would choose to run after something like that war and then stick it out.  However, once it’s over, there’s still half of the movie to go.  There is a suspenseful sequence in China that reveals Gellhorn’s courage in putting Madame Chiang Kai-shek in her place.  Joan Chen is still beautiful and gives a layered, elegant lesson in movie acting in about four minutes.  The final fifteen minutes are unnecessary.  Once Gellhorn leaves, the story is over.  A couple of end titles would have given the end of life information that is superfluous.  After all, the script doesn’t lay out the first few decades of their lives before they met in Florida.
Philip Kaufman’s direction beautifully pulls off the feat of blending the characters physically into the actual historical footage so that there is that metaphysical sensation that they’re really there.  Kaufman’s had experience doing that before in the Prague Spring sequences of The Unbearable Lightness of Being and in the TV news sequences of The Right Stuff, two of the best historical epics of the past forty years.  Here’s the kicker:  those two earlier works might not have engendered as many viewers on their initial cinematic releases as Hemingway & Gellhorn hopefully will on HBO.
http://www.hbo.com/movies/hemingway-and-gellhorn/index.html
There sure were a lot of cats in the movie!
Posted by Dexter at 10:15 AM 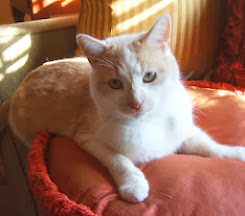